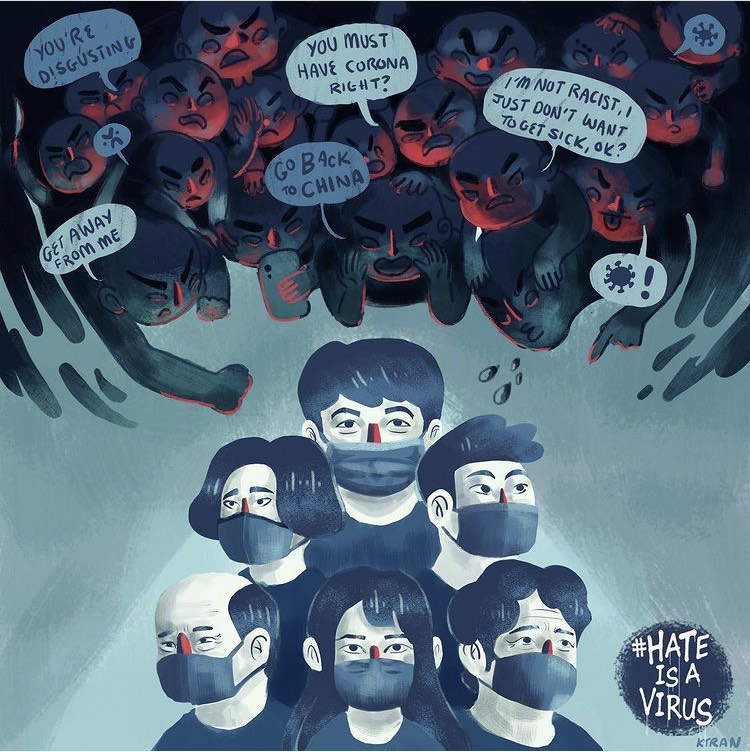 Digital photo illustration by Kaitlyn Tran (@dr_marshall_doodles via Instagram) in awareness for #HATEISAVIRUS . The movement aims to combat racism and xenophobia against Asians.

What the Anti-Asian Sentiment Seems

The advancements to resolving the COVID-19 pandemic have slowly progressed through the presence of vaccines. But while the recent developments suggest hope in returning to the normalcy of social interaction, a new societal tension spreads in lieu of the virus: the rise of anti-Asian sentiments.

The coronavirus— with origins tracing from Wuhan, China — has certainly proved the extent to which physical human interaction comes with consequence. When the world briefly fell into the abyss of public isolation, an alternative “disease” came underway to propagate blame for the existence of COVID-19. Xenophobia, raised from the spread of the virus from its origin, withheld justification of discrimination against Asians. In the United States, over 2,800 cases of anti-Asian discrimination, including attacks, were reported from March to December 2020, according to Stop Asian American Pacific Islander Hate (Stop AAPI Hate), a database created in response to the rise of racial violence. Even through the current gradual progression of vaccine distribution, the rhetoric of xenophobia has driven the uptick of violence against Asian Americans. Equitably, the increased nationwide hate crimes from 2020 and years prior present the ever-lasting principle of what it means to be a minority in the United States.

As a first-generation Asian American, I can’t help but to think about the future treatment of minority groups in a country bound as a mixing pot of all cultures. If current activism for the issues of today gradually accomplish its goals, how long will it actually remain effective? In the case of discrimination against minorities, there seems to be a repeat in the demand of fair treatment for people of color in the United States. For example, the fight against police brutality on primarily African American communities has been protested since the mid-1950s, and resurfaced as a foundation for the Black Lives Matter Movement which was effectively and recently advocated since 2013. The current cases of prejudice among Asian Americans is no exception, as the xenophobia raised from the coronavirus is driven by the “perpetual foreigner” stereotype that individuals of the Asian American Pacific Islander community hold.

According to Immigration Attorney Olivia Lee, the label of a “perpetual foreigner” is a means of assuming that the mother-country of one’s background is where an individual is truly from. This stereotype is generally associated with Asian Americans, with no exception to the forthcoming generations.

I remember a friend of mine saying— “I’m American. Not Chinese. And my mom is from Korea”— after being assumed as Chinese by a classmate during early spring of last year, followed by a comment that blamed her as a cause of the virus. Her remark framed the understanding of how an Asian American differentiates from a foreigner of an Asian country, in the sense that they are accustomed with that of American and foreign culture of their parents. Albeit, your country, whether it be of your family background or of birth, shouldn’t define you.

Understanding the idea of a perpetual foreigner further highlights the racist motives that the anti-Asian sentiments are built upon. The generalization of Asians is also an issue that tends to be overlooked. The assumption of one “looking Asian” and automatically concluding that they are from China, is a prominent example. And in most modern hate crimes pertaining to corona virus, this seems to be the case.

In early February 2021, a 61-year-old Filipino man was slashed in the face with a box cutter on a Manhattan subway, to which the mayor denied increased crime rates. In the same month, a 36-year-old Asian man was stabbed in New York City’s Chinatown, unprovoked. The suspect was charged under no account of a hate crime. A 84-year-old Thai man was killed after a seemingly unmotivated attack, one of many similar cases in the Bay Area; the surge of arbitrary attacks on Asians are explicitly reported day by day. But even through the mass awareness of the rise of Anti-Asian sentiment being spread on social media, it certainly does not conceal the long-standing prejudice of how a minority is, and will always be treated in the United States.

The view of Asian-Americans being a “model minority” should not exempt the justification nor question the reliability of reported attacks either. It circulates around the idea that Asians, out of all minority groups, are least likely to be met with legitimate discrimination, due to the assumption that they carry higher socioeconomic status. However, in light of recent attacks, the myth deems no meaning and instead guides the leading idea that minorities in the nation are placed at an disadvantage. This can be seen through the systematic treatment between law enforcement and minority groups.

In December 2020, 19-year-old Chinese-American Christian Hall and 30-year-old Filipino immigrant Angelo Quinto, were both killed by police in midst of a mental health crisis. The resort of using excessive force and taking immediate action when dealing with people of color is a recurring issue that highlights police brutality and the lack of proper responsive teams in cases of mental health. Quinto was held under the knee-to-neck restraint (carotid hold), the same action used on George Floyd leading to his death, which prompted the resurface of the Black Lives Matter movement in May 2020.

Asian Americans, under the “model minority” myth or not, are still minorities. It shall not be used as an excuse for ignorance towards the prominent issues that are presented daily.

We have come to a current period where foreign culture transitions into something new– the assimilation of cultural heritage from our background countries with newly diverse America. First generation Asian Americans bring forward a new view on the minority group, as compared to our parents, the first-gen immigrants. Technology and social media has also granted a new way of endorsing social issues by a wider-reach through digital activism. It is important to use these evolved rhetoric and resources as a means to progress the demand for change.

Younger people re-posting videos of elders being attacked due to Anti-Asian sentiment certainly raises awareness. Reacting and condemning xenophobia through individual means is benevolent, but ultimately doesn’t progress protective actions. It is even more so important to make light of the larger issuer at hand— acknowledging the inherent treatment of minorities— and working through collective measures in order to protect our minority groups.